***Keep in mind that Provo Craft has released a FREE online design studio Craft Room with a view of all existing 195+ carts. I stopped updating these files at the beginning of 2010 so more than half are missing. Just wanted to mention it to you so you can hold off on printing the files.***

Several posts on Provo Craft forums mentioned that with the new Gypsy people were missing the 'at-a-glance' cheat sheets, similar to the Gypsy Wanderings and Gypsy Font so I created some.

These are screen captures of the cartridges from PC web site, on post card size card stock in full color with cart name listed on each sheet.  Both front and back of each card has a different cartidge displayed.  These were created in MS Publisher and also saved as a .PDF document. I am still awaiting a reply from PC for permission to distibute these but in the meantime here is a link to the YouTube video: 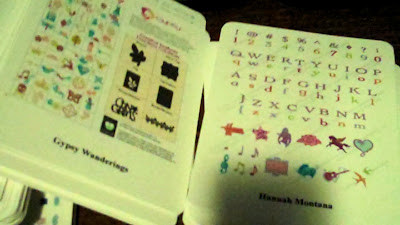