Some of you may have already heard/seen the unwelcome critters that have been trying to invade our little home so we've taken proactive steps and hired a licensed trapper.  Ron has been posting humane traps around our property for the last 4 days.  In that time he has caught 6 squirrels and 2 GIANT adult raccoons.  I have never been this close to an adult raccoon, and although I find them a cute animal, not knowing if they are carrying rabies the only allowed way for them to be handled in Connecticut besides release on the property is to euthanize them.  I struggled with this possibility but in the end could not simply release them to come back into our house.  I have had the chickens under lock and key all week to stop them from accidentally trapping themselves.  If we head nothing in the walls/ceiling tonight, the entry point will be repaired in the next couple of days on the off chance that these raccoons told their friends where we are.  The following photos are the two raccoons, the squirrels were released. 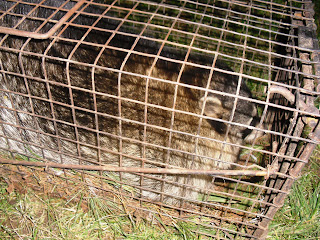 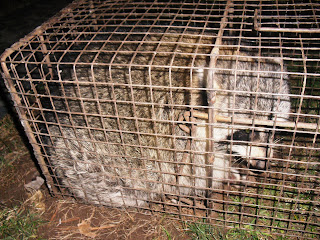