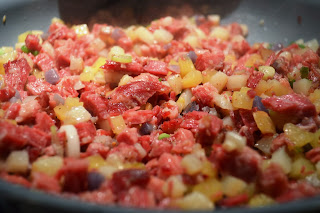 Paulie was my sous chef and chopped all the potatoes - Yukon gold, purple and red which were cooked the night before till almost done(12-13 minutes on simmer).  The corned beef was cooked on low simmer for 4 hours with a tablespoon of pickling spices and cracked black pepper, NO salt because it's brined and heavily salted to begin with.  Before boiling it, it was removed from it's brine 'sausage' packaging and rinsed under cold water. 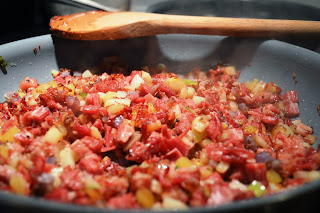 8 - 10 minutes in a medium high heat with a small pat of butter produces a crispy hash.  I removed the hash to saute the mushrooms separately to prevent it from getting too moist. 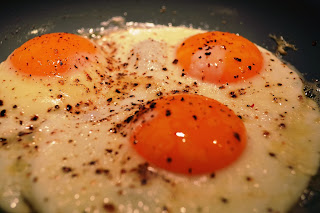 While the hash was crisping up, I cracked 3 fresh from the coop chicken eggs into a hot pan then once the egg whites set up, turned the heat down to 2-3 low on an electric stove to not burn or color up the bottom.  Another option is to put a tablespoon of water and put a lid on for a few minutes to steam cook the eggs.  I leave the eggs in the pan just long enough to set up the yolk so they can be broken and runny for sopping up with a piece of toast. 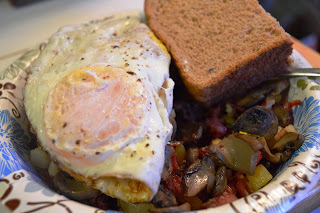 The 9 grain bread toasted in the oven while the hash and eggs were cooking on the stovetop.  Everything comes together in about 15 minutes and is a hearty and satisfying brunch.  Now there's a happy hubby snoring away on the couch.