We came home from brunch with my parents, celebrating several Birthdays, to my cell phone suddenly not being able to place outgoing calls. I tried to troubleshoot but it appeared that the phone was Locked, attempting to Unlock it produced an error that I was not in a network. I tried to reboot the phone, unlock permanently and temporarily all with the same failed results.

Having tried everything that was at my disposal, I contacted the Customer service online to be told that my phone is locked until I pay it off. That didn't sound right but I asked a few more questions and the customer service rep offered to unlock my SIM card. The email confirmation was received but I also noticed a similar text from less than 2 hours earlier (12:30 pm while we were at Mill On the River in South Windsor CT for brunch). Something clicked for me to check my account activity and what do I see there? A new phone line added with a 203 area code which is on the shore of CT while I live closer to the MA border in 860 area code.

I did a little more digging and although the customer service rep online was unable/unwilling to provide details on where the new line was added a call to 611 from my phone did that specifically.
A woman with a CT drivers license with my name appeared at a Maplewood NJ T-Mobile store and not only opened a new line but bought 2 new iPhone 8 with a 24 month payoff and had my SIM card reprogrammed for one of the new phones.

Here is a copy of the contract and check out the signature.... 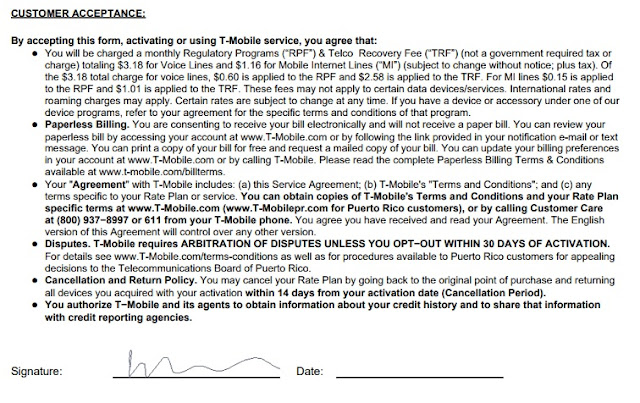 Another part of the documentation has the name of the store and the person who processed this account change. You know it was a no brainer, I called the store immediately and spoke with what happened to be the store manager. I asked what form of ID was provided, that's when I was told it was a CT DL and the woman impersonating me is African American in her 50s. That is not who I am and I did fund it rather funny that I'm so distinctly different looking. A copy of the license is on had at the store and will be provided to their Fraud Department.

My initial concern was not being able to make a call, now I find out that someone has my name on a drivers license with their photo. I'll be contacting the CT Motor Vehicle Department to see if the license was issued by them (the T-Mobile manager said it passed his fraud test). I will also be locking up my credit with all the credit bureaus since it appears the fraud might be more widespread than just the cell phone account issue.

Interestingly, I did check both my and my husband's information after the Equifax data breach was announced and both of us were supposedly in the clear. Maybe not!

Stay tuned for updates on this, keep an eye on your accounts and if your phone suddenly doesn't work it might be more nefarious than a simple reboot.